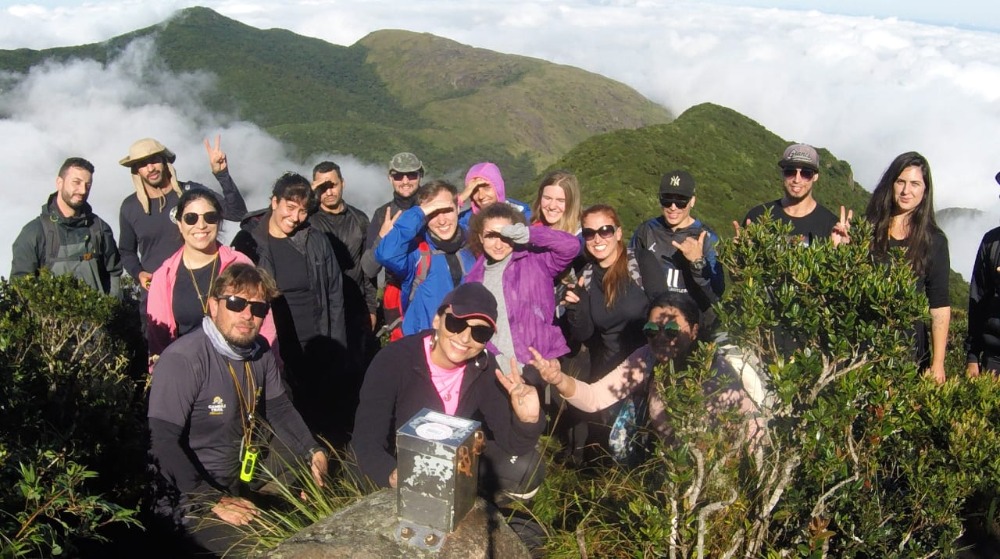 Linda Němcová is currently studying Media Studies and Political Science at the Faculty of Social Sciences at Charles University. She spent a semestr studying in Brazil. She wrote a blog post about her foreign experience.

My semester in Brazil, I really survived it and not only that, I even had one of the best times of my life

At first, my friends were very surprised when I mentioned that I was going to study in the south of Brazil, in a city called Curitiba. I admit you can’t get there in an hour from central Europe. At the same time, Brazil doesn’t have a reputation for being the safest country. However, I dare to say that right after reading my article you will be looking for information on how to apply for study exchange like this.

As for the school, I definitely have to mention the beautiful campus I had the opportunity to attend. It is a giant campus that not only offers classrooms and several different restaurants where students can eat, but also its own gym, outdoor sports area and swimming pool. Studying was limiting for me in the sense that I did not know Portuguese when I arrived in the country, so I could only take classes in English. At the same time, I knew from the beginning that I wanted to learn at least some basic Portuguese. To do this, the school has Portuguese language courses of different levels that students can enroll in. In my opinion, this is important not only because English is rarely used and known in the country, but it is also very important for a true understanding of the country´s culture. At the school, as international students, we were incredibly warmly welcomed, both by the headmaster and our professors, but also by the students themselves, who were very supportive all the way from the beginning to the end. In addition to interesting subjects, the school also offered us various volunteer opportunities, so there was always something to do throughout the semester.

Brazil is a beautiful country with a very diverse culture, due to the mixing of several nations within a few centuries. However, in general, Brazilian culture is heavily influenced by Western civilization, due to both longstanding Portuguese colonization and strong economic and political relations with the US.  Therefore, I do not think you’ll experience a huge culture shock upon arrival, but of course, like any country, there are some specifics. Many students from Europe put off studying in Brazil because of the high crime rate that exists in the country. I understand this and everyone has the right to make their own decision as they feel and perceive it. However, I can say for myself that I was not exposed to any unpleasant situation that was in any way out of line with European standards during my entire stay. Of course, one has to be careful and watch one’s surroundings to see if there is any danger. However, this should not be a reason to immediately exclude this country from one’s study goals. Crime takes place almost exclusively in the slums, known in Brazil as ‘favelas’, where drug gangs fight against each other and against the police and the army. At the same time, the partner school, the Pontifical Catholic University of Paraná, is a private university, so only people from the privileged, wealthier strata of Brazilian society study there.

Finally, I would like to mention the travel opportunities, which there are many in Brazil. There is something for everyone. A lover of Atlantic beaches who likes to lie on the beach and eat some exotic fruit. The adventurer who prefers the great outdoors and plans a hike in the Amazon rainforest. But also, a student with a love for the bustling big city who wants to dance to the rhythms of the samba in spectacular Rio de Janeiro. Of course, I visited the famous Christ statue, the breathtaking Iguazu Falls and other famous tourist spots in Brazil. However, this is not what comes to my mind when someone asks me about my memories. It’s mostly the people I experienced everyday moments with. Whether it’s the dinners we had together where we exchanged life stories. The new friendships that were made, even in unusual places like a sim card shop in a Brazilian shopping mall. Or watching the sunrise in complete silence with my roommate, who has become one of my closest people ever. These are the main and quite ordinary moments I take away from Brazil that will stay with me forever. So, if any of the possible international mobilities tempt you even a little bit, you should say YES!

De facto podcast Graduates of Faculty ICSJ IIS International relations Podcast De Facto
Manage Cookie Consent
To provide the best experiences, we use technologies like cookies to store and/or access device information. Consenting to these technologies will allow us to process data such as browsing behavior or unique IDs on this site. Not consenting or withdrawing consent, may adversely affect certain features and functions.
Manage options Manage services Manage vendors Read more about these purposes
View preferences
{title} {title} {title}